I am following up with my last v-log about the word, “Unique” in American Sign Language.

There were a lot of positive discussions about the sign word but there were also pushbacks and questions. I will try to answer them all in this video.

Yes, I am born in Germany on an army base but raised in America. However, I moved to Calgary, Alberta in 2016 and I will soon be getting my dual citizenship this year.

I truly do love Canada. It is enriched and full of diversity with people from all over the world. I love the community; both Black and Deaf communities but we do have a problem that we need to address; lack of accessibility and racism.

“Do you have a degree in ASL?”

No. But having a degree in ASL does not mean you’re an expert in being anti-racism.

“Why are you bringing it up when you have no right to express yourself because you are from America?”

First…. this land originally belonged to Indigenous people. We must always remember that and honour them because the effect of cultural genocide is ongoing.

Second… I am not speaking as an American. I am speaking as a Black person from America living in Canada. I’ve lived here for five years. I remained quiet and learned about the culture, dynamics and barriers here.

The only time I’ve said anything was with interpreters. I asked several interpreters to please not use one version of “Unique” in American Sign Language. I explained that it was very triggering for me. And still, my requests were ignored repeatedly for five years. I’ve seen it over and over. Only one? No. It was also others including white Deaf people who use it around me. I’ve asked them to not use it.

I didn’t publicly say anything at first. Only privately with my friends and interpreters.

You cannot support me as an advocate for the Deaf community without supporting me as a Black person. If I cannot express myself as a Black Deaf woman living in Canada then I should not be able to call Mykonos Street Grill a Black and Deaf owned business nor can I call myself an advocate; sharing my knowledge of what is possible from America.

You cannot call me Canadian and then take it back when you become uncomfortable.

Allow me to throw you an important word, “tone policing”

Straight from the dictionary: ad hominem (personal attack) and anti-debate tactic based on criticizing a person for expressing emotion. Tone policing detracts from the validity of a statement by attacking the tone in which it was presented rather than the message itself.

I made that v-log after I corrected an interpreter for using the one version of “Unique” in American Sign Language. I corrected her politely even though it wasn’t the first time she did it. And still, she continued to use that sign which was triggering for me within five minutes.

I was sick to my stomach. I was also traumatized and exhausted.

What do I do when my requests have been ignored for five years straight? I did the only thing that I could do… post a v-log publicly and I posted it privately on my page for my friends to be aware of it. Some wanted the ability to share it so I posted it on Youtube.

And honestly… right now I am codeswitching by signing in PSE instead of ASL because I am afraid that people will see me being too aggressive if I sign too fast or big. But even then, people still see me being aggressive.

“What about the older generation? It is hard to change something you’re used to.”

We have and can change how we sign things. ASL is so beautiful because continues to evolve and create our own words like a champ, kiss fist, pah and more.

Racism is not something to be comfortable with and of course, people will complain about having their own comfort be interrupted. We have signed so many racist things like, “Chinese” (pulling the corner of the eye) which was racist. We did not change until a Chinese person told us that it was racist.

How do we change if a person cannot say something?

“Well, what about LSQ? What if they signed something triggering?”

America and Canada are both in North America. The line is very thin. Both countries use American Sign Language. American and Canadian Deaf people can still understand each other.

Like you, perhaps; whether you are American or Canadian. You are watching my video and you still understand me;  whether you are American or Canadian. We still have a heavy influence on each other whenever we make a v-log. There are times when we see something we have not seen before and that is normal because of the difference in dialogue and regionals.

Just like how American and Canadian hearing people can understand each other but have few different words. Honestly, my favourite one is the restroom. In American, we sign with ‘t’ but in Canada, we sign ‘secret’. I was so confused the first time I saw it and then I cracked up when I figured it out. Did I change it? No. I adapted.

But LSQ has their own grammar, rules, structures and even hand shapes. French and English are two completely different languages. I cannot change something that I do not understand.

And quite frankly… I do not want to. I think it’s fucking cool that we have almost 300 different sign languages all over the world even if we have a different meanings for the same sign like ‘married’ meaning ‘friendship’ in japan.

Again, Spanish Sign Language have their own grammar, rules, structures and even hand shapes. Honestly, this applies to every other language. And even if I could understand them… I wouldn’t correct it at all because it is in no way a slur.

“How would you feel if we did the same with BASL?”

… you have. BASL has been colonized and whitewashed with ASL.

We are fortunate enough to start documenting Black American Sign Language in America. However, we are struggling to do the same in Canada.

One thing I will say is… my heart breaks for the Indigenous Deaf community because it is, even more, harder for them to preserve their language.

“What about the sign for nerd/funny/clown/pee/close or any other area on the nose?”

I am clarifying that I do not have a degree in ASL.

While I do not represent the entire Black Deaf community but I am a member of the community. I am allowed to express myself about how triggering the word, “unique” is for me. Some may agree. Some may not agree. That is okay. There is no one way to be Black.

For ME personally…. Unique and N-word are similar because of the hand shape, same movement, same placement.

Unique can be done lazy.

I really hope that all of this answers everyone’s questions. Again, you do NOT have to use the unique sign. Invent something else if you want. I only ask that you change this one version of “Unique” in American Sign Language. 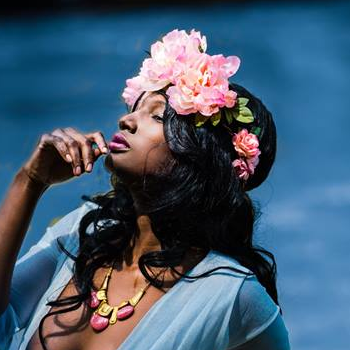 Originally from Washington D.C., Ebony lives in Calgary, Alberta and primarily works with digital media. She is an advocate for accessibility for artists with disabilities.